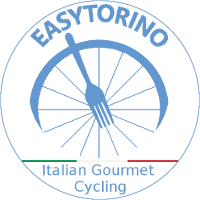 Torino and Milano, the two largest cities of North Italy: connected by an high speed train, a one-hour journey and there you are. And in between nothing worthy. Well not exactly… The river Po landscapes, rice fields, ancient hydraulic marvels, nature reserves, ancient villages, they will proudly show up as we ride the VenTo itinerary.

Torino and Milano, the two largest cities of North Italy: connected by an high speed train, a one-hour journey and there you are. And in between nothing worthy. Well not exactly... (read more)

Torino and Milano, the two largest cities of North Italy: connected by an high speed train, a one-hour journey and there you are. And in between nothing worthy. Well not exactly… The river Po landscapes, rice fields, ancient hydraulic marvels, nature reserves, ancient villages, they will proudly show up as we ride VenTo itinerary.

Day 1: we meet in the morning for the tour briefing and the set-up of our bicycles. We exit the city following Torino’s parks riding on the shores of river Po at the feet of the hills. We reach the old town of San Mauro then cross the brickstone bridge entering the park of Settimo. We are cycling through trails and dirt roads along the VenTo itinerary: VenTo is a cycleroute under development connecting Turin to Venice, where some parts are already bikeable while others are due to be completed within the next years. During our trip we will follow VenTo as much as we can, taking advantage of the existing sections and detouring along minor roads when unavailable. Get past the urban belt we hit Chivasso, the initial point of the 83 km long Cavour Canal, an hydraulic masterpiece built in the XIX Century to drive waters to the rice fields. Here is where the Padana plain begins in fact: the largest lowland of Italy extending from Piedmont to Veneto through Lombardia and Emilia along the course of river Po. We ride flanked by green rice fields and canals, until the rural town of Crescentino, our overnight stay. Tonight we will taste the renown risotto vercellese and much more!
DISTANCE: 52 km
ELEVATION: 80 mt

Day 2: an entire morning riding through the rice fields, the cultivated area is huge! So huge that locals use to call it the “squared sea”, because when the fields are flooded it can be seen only water to the horizon! We pass farms and villages surrounded by rice plantations, with birds flocks in the air, until we reach Casale at the beginning of Monferrato wine area. We pass the bridge and explore its pedestrian city center, enriched by medieval buildings and charming piazzas. We proceed out of town cycling at the feet of the hills along the natural reserve of river Po, following paths and trails. The castle of Pomaro standing upon the hillock indicates we are close to the arrival, a small ascents and there we go. Tonight a “cena Monferrina” dinner is the reward, with delights and wines from the Monferrato hills.
DISTANCE: 61 km
ELEVATION: 50 mt

Day 3: down the hillock and back along the river Po, crossing the old bridge dividing Piedmont from Lombardy. We just entered Lomellina, a region devoted to agriculture and farmings. We follow a network of minor and dirt roads across the Garzaia, a wetland area featuring breeding colonies of herons. Few farms and small villages along the way, there are more tractors than other means of transport! The woods gives way to rice fields and cultivated land, the church bells rings out the hours, a woman pushes the buggy, a peasant bid hallo: the bustling city life is so far away! We get past Cairo and ride towards Sannazzaro, home of the powerful noble family who ruled the Lomellina region from the X century all over the Middle Ages and to the XVIII century. We proceed now southwards getting closer to the river Po and we take the trail running beside the shores, then back along the paved embankment road until our family hotel restaurant: cosy stay and tasty Lomellina dinner, nothing better to end the day.
DISTANCE: 63 km
ELEVATION: 30 mt

Day 4: we are about the leave the Po itinerary after three days in company of the big river. We say goodbye to Eridano (so-called in the Roman Times) and head towards the ancient city of Pavia, a primary crossroad along the medieval Francigena pilgrim route connecting Canterbury in Britain with Rome, and an important commercial hub since the Roman age. We enter the historical centre crossing the celebrated covered bridge, 200 metres long, made of bricks and stones and featuring a splendid trussed roof. We slowly cruise surrounded by medieval and renaissance buildings, through piazzas and alleys, until we hit the Naviglio Pavese canal cyclepath starting just off the town. The canal was completed in 1819 and is part of a network of waterways called Navigli linking Milan with the province. We proceed alonside Naviglio Pavese through river villages then take a quick detour inland to the Certosa di Pavia monastery, one of the largest in Italy, erected from the XIV Century in Gothic and Renaissance styles. We are not far away from Milan, the urban density increases as long as we advance along the cyclepath. We step into the metropolis from its south gate Porta Ticinese and hit the nearby Naviglio Grande canal, the nightlife district of Milan: perfect place to celebrate the arrival of the tour with a classic Italian Aperitivo.
DISTANCE: 47 km
ELEVATION: 60 mt